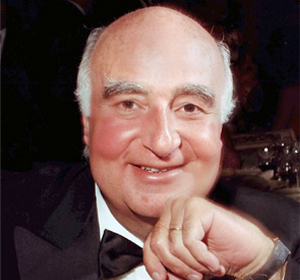 Mr. Edmond J. Safra was one of the most accomplished bankers of the 20th century, having established an unparalleled reputation for financial acumen and trust. Scion of a respected Aleppo family whose roots in banking began during the age of the Ottoman Empire, Edmond Safra used his considerable talents to build a business that spanned more than thirty countries across the globe.
Edmond Safra was just sixteen when he went to Milan to work on behalf of his family’s banking business. Following Edmond’s recommendation, the Safra family moved to Brazil, where father and son founded Banco Safra S.A. Edmond Safra was Founder and Honorary Chairman of the Republic New York Corporation and Republic National Bank of New York and was Chairman of its European private banking subsidiary, Safra Republic Holdings S.A.

In 1999, Mr. Safra sold all of his holdings in Republic New York Corporation and Safra Republic Holdings to London-based HSBC. A victim of arson at his home in Monaco, he died on 3 December 1999 and is buried in Geneva.

Edmond J. Safra inherited from his parents an extraordinary sense of duty and obligation to others. His father, Jacob, was a leader of the Jewish community of Beirut, one of the most important patrons of the synagogue and other religious institutions, in addition to a generous supporter of the less fortunate. Jacob Safra, himself having inherited a long-standing family tradition of philanthropy, imparted to his son the lesson of leading by personal example.

Although she died when he was young, Edmond Safra always remembered accompanying his mother, Esther, on her regular visits to the poor and sick in Beirut, learning the importance of charity and compassion for those in need. His character was molded in these early years, and throughout his life he continued to think of philanthropy as a solemn responsibility and a privilege, never a burden.

This sense of duty permeated all aspects of his life. The head of a worldwide banking empire with thousands of employees and billions of dollars in assets, every minute of Edmond Safra’s day was incredibly valuable. Yet, over the years, he devoted an enormous amount of time and energy to helping others in countless ways, his humility leading him to almost never take any personal credit.

He had staff members in Geneva, New York, London, Paris, Mexico City, and Buenos Aires, as well as other offices, dedicated to fielding and following up on all requests for assistance, and rare was the case that someone was turned away with an empty hand. He actively searched for people who needed his assistance – rather than simply waiting for them to come to him – by regularly calling his friends in other cities and asking them to find worthy causes for him to support.

Edmond J. Safra is remembered worldwide as a kind and noble benefactor who was always available to those who called on him in their hour of need and whose generosity was virtually unmatched.

Edmond Safra’s faith was an essential part of his everyday life. He wholeheartedly embraced the traditions of his Jewish heritage, reciting daily prayers every morning, celebrating the holidays in the synagogue with his family, and discussing the holy books with rabbis and teachers. It is well known that Edmond J. Safra was particularly devoted to the community from which his family came, and in his lifetime, he was said to be the most significant individual supporter of Sephardi religious and cultural institutions worldwide.

He was a great patron of the rabbis with whom he was involved, providing funds enabling them to devote themselves to study, in addition to assisting their community organizations and yeshivot. In helping to support schools, synagogues, community centers, cemeteries, and other necessities, Edmond Safra’s generosity was both direct and indirect, as he often used his influence to solicit additional funds from others.

Edmond Safra placed particular importance on the needs of smaller, less affluent Jewish communities, wanting to ensure that they had the essential facilities to sustain Jewish life. He helped such congregations – Sarajevo and Rhodes, among many others – have services on Rosh Hashanah, Yom Kippur, and Passover by providing funds for a hazzan, siddurim, and food and wine. He was deeply committed to ensuring that Jewish communities had the opportunity to pray and celebrate holidays together.

While he supported religious organizations all across the globe, and particularly in Israel, Edmond Safra focused much of his philanthropy in the cities where he lived (Milan, São Paulo, Geneva, New York, and Paris) and in which his banks had offices. Additionally, he hoped his support could serve as an example to communities that did not have a well-established culture of charitable giving.

He believed that constructing and renovating synagogues was important in places where there was a potential for a Jewish community to flourish, and synagogues around the world bearing his father’s name testify to this commitment. Many of these were built in the world’s major Jewish centers, but Edmond Safra also helped to build synagogues in more remote communities such as Manila and Kinshasa.

He helped to renovate and enlarge synagogues in Amsterdam, Madrid, Istanbul, Naples, Budapest, Rhodes, and Vienna. He saved the historic synagogue of Clermont-Ferrand (France) from destruction by buying it for the community, and he contributed to the expansion of the Cannes synagogue and Synagogue Beth El in Paris. He also helped refurbish synagogues in many small French cities including Evian, Annemasse, and others.

He supported dozens of synagogues and yeshivot in Israel, including those led by Rabbi Yaacov Attieh (his family’s rabbi from Beirut) in Bat Yam, as well Yeshiva Porat Yoseph, the Jerusalem Great Synagogue, and many others. In addition, the tombs of Rabbi Meir Baal Haness and Rabbi Shimon Bar Yohai were especially important to Edmond Safra, and he was without question the most generous supporter of these holy pilgrimage sites. For many years on erev Shavuot, the yahrzeit of his beloved father, he would pray at the tomb of Rabbi Meir until dawn.

Throughout the world, one can find hundreds of Sifrei Torah and sacred books that Edmond Safra donated to yeshivot, synagogues, and kollelim in memory of his parents. He lent books from his collection and supported exhibitions of ancient Hebrew manuscripts at the Bibliothèque Nationale de France in order to encourage younger generations to learn about their Jewish heritage.

Caring for the sick took priority over everything else in Edmond Safra’s life. If a family member, friend, or employee became ill, he would devote his time and resources to helping him or her have a full recovery. He would speak with dozens of the world’s best doctors about the case, he would personally visit the hospital, and he often sent planes to transport people and necessary medicines. During his lifetime Edmond J. Safra donated millions of dollars to provide medical treatment for sick individuals – people he did not know personally – who sought his assistance.

Hospitals across the globe – the Hôpital Cantonal de Genève, the Hôpitaux de France, and countless institutions in the United States, for example – benefited enormously from Edmond Safra’s generosity. He was one of the founders of Albert Einstein Hospital in São Paolo, today one of South America’s largest and most prestigious medical centers. In Israel, he initiated the construction of the cutting-edge Edmond and Lily Safra Children’s Hospital at Tel Hashomer.

In the area of medical research, he was a significant supporter of the Institut Pasteur in Paris, the Weizmann Institute in Israel, and a number of different centers studying specific diseases in France, the United States, and elsewhere around the world. He created the Edmond and Lily Safra Chair in Breast Cancer Research at Tulane University.

At the time he made public his own battle with Parkinson’s disease, Edmond J. Safra announced his intention to devote significant resources to helping those suffering with the disease and finding a cure.

Edmond J. Safra believed higher education was essential for every young person in the modern world, even though he himself never attended university. Understanding that the highest form of philanthropy is helping people be able to provide for themselves, he was firmly committed to making educational opportunities available for children from disadvantaged backgrounds.

During his lifetime Edmond J. Safra provided university scholarship funds for hundreds of needy students who were recommended by friends and employees. In addition to this direct assistance, he helped tens of thousands more through the International Sephardic Education Foundation (ISEF), an institution he established in 1977 to support deserving Israeli students. Recipients of ISEF scholarships have distinguished themselves across the globe in every discipline.

Edmond J. Safra also helped universities directly, often through the support of chairs and particular programs (such as Judaic Studies). For example, at Harvard University he endowed the Jacob E. Safra Professorship of Jewish History and Sephardic Civilization, and he gave significant funds for the Robert F. Kennedy Visiting Professorship in Latin American Studies. At the University of Pennsylvania’s Wharton School of Business, he created the Jacob E. Safra Professorship of International Banking and the Safra Business Research Center.

He was a significant benefactor of the American University of Beirut, and he was awarded Honorary Doctorates by the Hebrew University of Jerusalem and Yeshiva University (where he established the Jacob E. Safra Institute of Sephardic Studies) for his ongoing support of those institutions.

With respect to younger children’s education, Edmond Safra directed most of his support to poor Jewish community schools, particularly those that had the potential to encourage Jewish continuity. He was especially devoted to schools in the cities where he lived – for example, he founded Ecole Girsa, Geneva’s first and largest Jewish school. He took great pride in founding the Beit Yaacov school in Bat Yam, which has been consistently rated among the best of Israel’s schools.

He made major contributions to the national, cultural, and religious life of the State of Israel, including building Safra Square in Jerusalem. He purchased Einstein’s 1912 manuscript of the Special Theory of Relativity and donated it to the Israel Museum, and he also provided funds for this museum to deconstruct, transport, preserve, reassemble, and display the historic synagogue of Suriname. He was a Founding Member of the Israel Philharmonic Orchestra’s International Board of Governors, a Founder of the Israel Museum, and a long-time supporter of Yad Vashem.

Also in Israel, he generously supported institutions providing welfare services to the less fortunate, as well as a variety of organizations serving children with special needs.

Mr. Safra created a major philanthropic foundation to ensure that needy individuals and organizations would continue to receive assistance and encouragement for many years to come.  Following his passing in 1999, and under the chairmanship of his beloved wife Lily, the Edmond J. Safra Philanthropic Foundation draws continuing inspiration from its founder’s life and values.