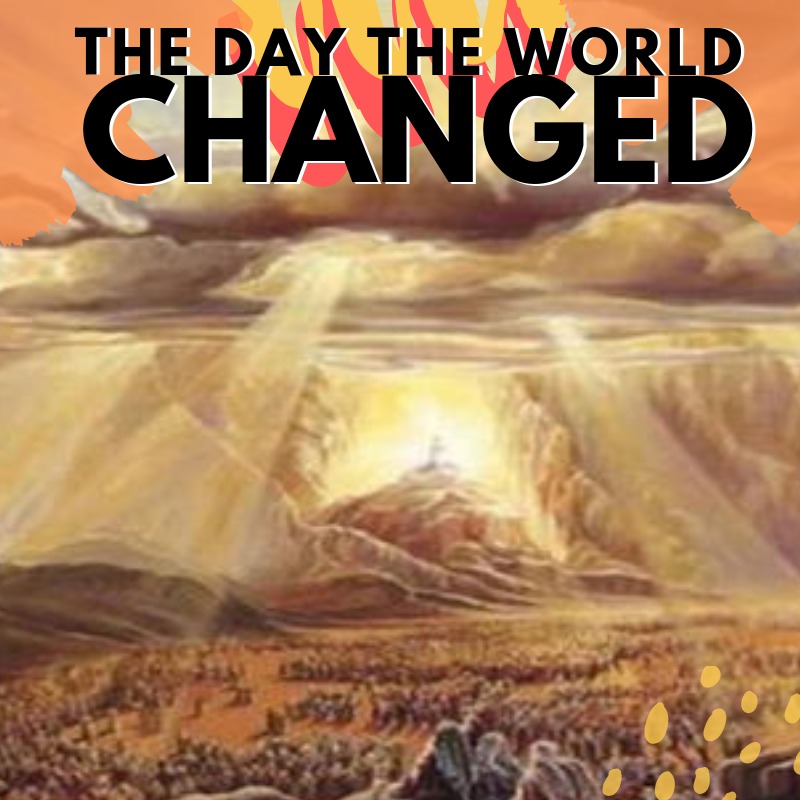 In this week's Perasha we continue on our journey and relive the most colossal event to ever take place in Jewish history, Matan Torah, the giving of the Torah.

The entire Am Yisrael, over 2 million men, women and children, as well as the souls of all future generations of Jews, assembled at the base of Mount Sinai to accept the Torah from Hashem.

However, the Torah we accepted at Sinai was already in existence and had been studied and practiced for many generations prior to Matan Torah. The Midrash tells us of the Bet Midrash of Shem and Ever and that our forefathers, Abraham, Yisshak and Yaakob all established yeshivot. It was the Tribe of Levi who maintained these yeshivot, occupying themselves in Torah study throughout the Egyptian exile. Furthermore, our sources relate how our ancestors fulfilled the entire Torah before it was given, adhering to even the most minute details of Halakha, including the law of Erub Tabshilin in which we set aside food before Yom Tob to allow preparations on Yom Tob for Shabbat.

Nothing new was transmitted at Sinai, and no unbeknownst ethical code was mandated there. What then was the novelty of the Sinai Revelation?
The Midrash explains the significance of the event by comparing it to the story of, "a king who decreed that the people of Rome should not migrate to Syria and that the people of Syria should not migrate to Rome. Similarly, Hashemdecreed when he created the world: The heavens are heavens of the Lord, but the earth He gave to the children of men. However, when He decided to give the Torah, He abrogated the first decrees and declared: Let the earthly beings ascend on high and the heavenly creatures descend below, and I will be the first (to do so), as it is said: And G-d came down upon Sinai(Shemot 19:20). And it is also written: And to Moshe He said: 'Come up unto the Lord' [Midrash Tanhuma 15]."

Since the creation of the world there was an infinite gulf between heaven and earth. While the Torah of our forefathers was applied to physical life, their physical life could not be elevated and could not transcend its finite nature. The Torah was a completely spiritual doctrine that applied strictly to the human soul and to heavenly matters. The inverse was true as well; the spiritual world could not be brought down to earth because it would cease to be spiritual.

At Sinai G-d nullified that decree. As it says in our Perasha, and as quoted in the aforementioned midrash, "And G-d came down upon Sinai. And to Moshe He said: 'Come up unto the Lord'." They met halfway, so to speak. It was a true marriage, a two-way relationship in which each partner not only relates to, and connects with the other, but also participates in defining the nature of the relationship between them. G-d on his end brought the spirituality of the heavens down to earth. He also summoned Moshe to the top of the mountain, empowering man to raise his physical self and the world around him to a higher state of existence. The Torah could now sanctify physical life. Matan Torah created the ability for integration.

Of course before Matan Torah a person could connect to G-d and there were missvot. However, they could not fundamentally change the chemistry of the world. The world remained a physical world, and G-d remained G-d. Heaven and earth remained separate. You could impact and you could influence, but you could not fundamentally transform. The novelty of Matan Torah was the ability to change the very matter of earth, of a human being, of human psyche and of the world around us.

The revelation at Mount Sinai reconciled the paradox of merging a transcendent and spiritual world with a finite and tactile one. It enabled the wisdom and will of G-d to be apprehended by the human mind and actualized in the physical life of man. The giving of the Torah allows us to experience something that is timeless, within the timing restrictions of the reality we live in, such as the times for the onset of Shabbat and for the morning reading of Shema. It allows for the integration of unbounded spirituality within the confines of space and size, such as the place of the altar in the Holy Temple and the dimensions of a sukkah. By actualizing the spiritual, the Torah achieves the impossible task of retaining the spiritual's boundlessness and purity, while using the finiteness of the physical object for spiritual advancement.

Here too, a descent of the spiritual and an ascent of the physical is necessary. The soul, which naturally avoids the vanity of the material, must lower itself downward to coexist in the physical life of the body, and the physical self, which prefers the sensual experiences, must aspire to reach higher and to rise above its lowly temptations.

It is only through the Torah that we can achieve a true union of body and soul and ultimately achieve a union of heaven and earth, of Creator with creation.