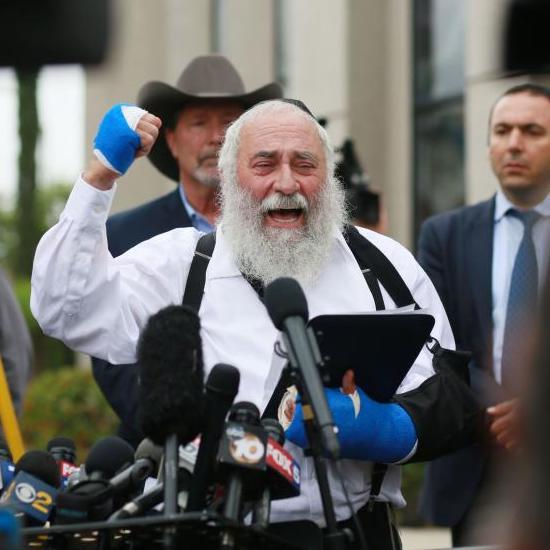 This week we marked Yom HaShoah. It is a heavy day with a heavy responsibility. We are asked to remember that in this world which has such potential for love and light, there is often darkness and hate.

Unfortunately, this week it is not something we need to remember from the distant past. It is fresh and painful, having had yet another maniacal anti-Semite walk into a synagogue in Poway, California and attempt to gun down an entire congregation. One week ago Lori Gilbert Kaye went to shul. She would never come home again. Rabbi Yisroek Goldstien has been an exemplary leader and voice in this terrible time, standing for his people and community with strength and dignity.

I thought it would be appropriate to let his words accompany us this week, so I have included the article he wrote for the New York Times.

I ask that we honor our brothers and sisters wishes in Poway and come to synagogue this Shabbat in a stand against this cancerous type of attack. It is important to show that their heinous crimes do not achieve their desired results. We must respond with bravery and strength and turn up to shuls this Shabbat, in our masses. Men, women and children. Make the extra effort to come. It is our best protest, and it says succintly, it will never work. You will never stop us. We have always, and will always, carry on.

Poway, Calif. - Today should have been my funeral.

I was preparing to give my sermon Shabbat morning, Saturday, which was also the last day of Passover, the festival of our freedom, when I heard a loud bang in the lobby of my synagogue.

I thought a table had fallen down or maybe even that, God forbid, my dear friend Lori Gilbert Kaye had tripped and fallen. Only a few moments earlier I had greeted Lori there; she had come to services to say Yizkor, the mourning prayer, for her late mother.

I went to the lobby to check on her. What I saw in those seconds will haunt me for the rest of my days.

I saw Lori bleeding on the ground. And I saw the terrorist who murdered her.

This terrorist was a teenager. He was standing there with a big rifle in his hands. And he was now aiming it at me. For one reason: I am a Jew.

He started shooting. My right index finger got blown off. Another bullet hit my left index finger, which started gushing blood.

After the massacre in Pittsburgh, we had a community training. Now that training kicked in. Somehow my brain directed my body to the synagogue ballroom, where the children, including two of my grandchildren, were playing. I ran toward them screaming "Get out! Get out!" I grabbed as many as I could with my bloody hands and pushed them out of the building.

One of our congregants that day, Almog Peretz, a veteran of the Israeli Defense Forces, ran after me to help get the children to safety and took a bullet in the leg. His eight-year-old niece, Noya Dahan, took some shrapnel to hers. Then an amazing miracle occurred: The terrorist's gun jammed. Two other heroic congregants - an Army veteran named Oscar Stewart and an off-duty border patrol agent named Jonathan Morales - rushed toward him and he fled.

The ambulances had not yet arrived. We all gathered outside. I don't remember all that I said to my community, but I do remember quoting a passage from the Passover Seder liturgy: "In every generation they rise against us to destroy us; and the Holy One, blessed be He, saves us from their hand." And I remember shouting the words "Am Yisrael Chai! The people of Israel live!" I have said that line hundreds of times in my life. But I have never felt the truth of it more than I did then.

I do not know God's plan. All I can do is try to find meaning in what has happened. And to use this borrowed time to make my life matter more.

I pray that my missing finger serves as a constant reminder to me. A reminder that every single human being is created in the image of God; a reminder that I am part of a people that has survived the worst destruction and will always endure; a reminder that my ancestors gave their lives so that I can live in freedom in America; and a reminder, most of all, to never, ever, not ever be afraid to be Jewish.

From here on in I am going to be more brazen. I am going to be even more proud about walking down the street wearing my tzitzit and kippah, acknowledging God's presence. And I'm going to use my voice until I am hoarse to urge my fellow Jews to do Jewish. To light candles before Shabbat. To put up mezuzas on their doorposts. To do acts of kindness. And to show up in synagogue - especially this coming Shabbat.

I am a proud emissary of Chabad-Lubavitch, a movement of Hasidic Judaism. Our leader, the great Rabbi Menachem Mendel Schneerson, famously taught that a little light expels a lot of darkness. That is why Chabad rabbis travel all over the world to set up Jewish communities: I have colleagues in Kathmandu, in Ghana, as well as in Paris and Sydney. We believe that helping any human being tap into their divine spark is a step toward fixing this broken world and bringing closer the redemption of humanity. It is why 33 years ago my wife and I came to this corner of California to build a house of light.

Because we are obviously Jewish, identifiable by our black hats and beards, it has also meant that some of us have been targets before. Eleven years ago, my colleagues Rabbi Gavriel and Rivka Holtzberg, who ran the Chabad of Mumbai, India, were murdered with four of their guests. They were targeted by the terrorist group Lashkar-e-Taiba because they were Jewish. And over the years people I know have been harassed and assaulted by thugs in the neighborhood where I grew up, Crown Heights, Brooklyn, in incidents that typically go unreported by the press.

In his vile manifesto, the terrorist who shot up my synagogue called my people, the Jewish people, a "squalid and parasitic race." No. We are a people divinely commanded to bring God's light into the world.

So it is with this country. America is unique in world history. Never before was a country founded on the ideals that all people are created in God's image and that all people deserve freedom and liberty. We fought a war to make that promise real.

And I believe we can make it real again. That is what I pledge to do with my borrowed time.